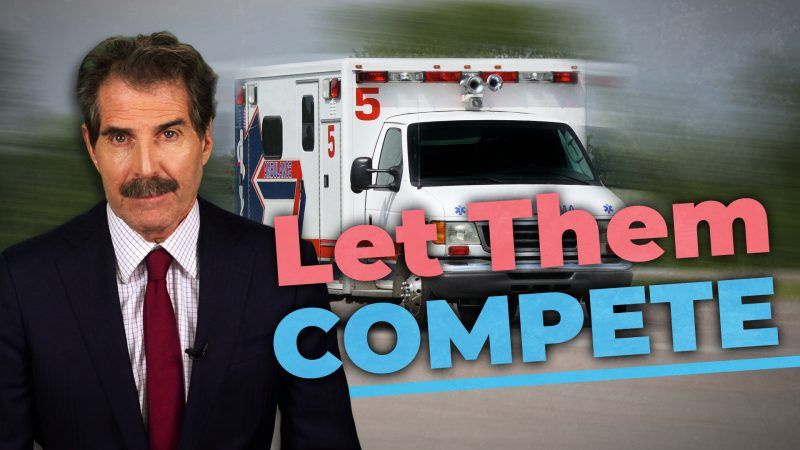 Want to start a business? Imagine having to get your competitors' permission first.

John Stossel points out that in 35 states, laws block new businesses from operating unless they get their competitors' permission. One such law prevents Phillip Truesdell from operating ambulances in Kentucky.

"You're going to tell me that I'm not fit to work in your town?" he asks.

He and his daughter Hannah Howe run Legacy Medical Transport, an ambulance service, in Ohio.

When they tried to expand into Kentucky, which is just a few minutes away from them, they learned it would be illegal.

Truesdell doesn't think this is right.

He tells Stossel, "Anybody that draws breath ought to be allowed to work. Who gives the big man the right to say, 'You can't work here?'"

"The government. The law," Stossel responds.

Then "Kentucky ought to change that law," says Truesdell.

To do that, he and his daughter are working with the Pacific Legal Foundation, which filed a lawsuit with the goal of getting CON laws declared unconstitutional.

Kentucky authorities and established companies resist. One ambulance provider told us, "When saturating a community with more [Emergency Medical Services] than it can financially support, all agencies become watered down."

Truesdell's attorney, Anastasia Boden, calls that "absurd." She tells Stossel, "It is an abuse of government power to restrict somebody's right to earn a living. [It's] just as a handout to the other businesses."

"It's not a handout. It's protecting a vital service," Stossel pushes back.

"It's protecting a vital service for the current operators only," she responds.

Boden says we need competition, "because competition has been the driving force of innovation, lower prices, and better services."

Stossel agrees: "Competition works! CON laws are a bad deal for both consumers and entrepreneurs. No one should have to ask permission to compete."