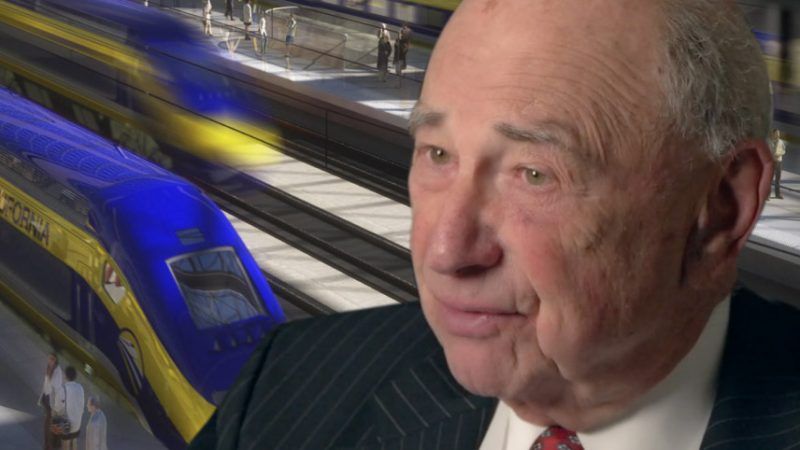 High-speed rail lines began popping up in Europe and Asia in the early 1980s. Passengers were exhilarated by the futuristic trains rocketing between cities on glass-smooth rails at upwards of 200 miles per hour.

With high-profile roll-outs in France and Japan, bullet train mania was underway. And then reality set in.

"The costs of building such projects usually vastly outweigh the benefits," says Baruch Feigenbaum, assistant director of transportation policy at the Reason Foundation, the 501(c)(3) that publishes this website. "Rail is more of a nineteenth century technology [and] we don't have to go through these headaches and cost overruns to build a future transportation system."

But politicians can't resist the ribbon cutting ceremonies and imagery of sleek trains hurtling through the lush countryside. So the projects keep coming.

California's high speed rail line was sold to voters on the bold promise that it will someday whisk passengers between San Francisco and Los Angeles in under three hours. Nine years later, the project has turned into such a disaster that its biggest political champion is now suing to stop it.

An icon of California politics known as the "Great Dissenter," Quentin L. Kopp introduced the legislation that established the rail line, and became chairman of the High-Speed Rail Authority. He helped convince voters in 2008 to hand over $9 billion in bonds to the Rail Authority to get the project going. Since he left, Kopp says the agency mangled his plans.

"It is foolish, and it is almost a crime to sell bonds and encumber the taxpayers of California at a time when this is no longer high-speed rail," says Kopp. "And the litigation, which is pending, will result, I am confident, in the termination of the High-Speed Rail Authority's deceiving plan."

Voters supported the bond measure to pay for construction on the condition that the train would be self-sustaining. But multiple outside analyses conclude that the Rail Authority will have to massively hike ticket prices or rely on taxpayer largess. According to one recent estimate, the project's latest iteration would suck up at least $100 million in annual subsidies.

Since 2008, lawsuits have multiplied, private investors have fled, and even the official price tag has nearly doubled, from $33 billion to $64 billion. When the legislature cleared the way for the Rail Authority to begin selling the voter-approved bonds in early 2017 to fund construction, the agency declared it a "milestone."

"It's deceit. That's not a milestone, it's desperation, because High-Speed Rail Authority is out of money," Kopp told Reason.

Kopp joined a lawsuit brought by attorney Stuart Flashman, who has represented environmental and transportation groups in several previous actions against the Rail Authority. He aims to stop the project on the grounds that the agency broke numerous promises to voters enshrined in the 2008 ballot measure, including that all the financing for a segment had to be in place before construction could begin.

Feigenbaum believes that starting construction even though there isn't enough funding allocated to finish the project is a deliberate strategy: The Rail Authority intends to sink as much money into the project as possible, hoping to extract further taxpayer subsidies to complete it.

Kopp and Flashman still believe in high speed rail. They say it's just that this particular project has been hijacked by special interests.

Since rail projects are usually driven more by politics than consumer demand, however, nonsensical design decisions are common. That's true even in France and Japan, where a couple of the first high speed rail lines were actually profitable. After those lines were up and running, they built dozens more money-losing systems.

Flashman says the California project has also become a land grab, and the lawsuit is named for one of the farmers whose property was threatened. But this is typical of bullet trains. By design, high-speed rail lines require wide swaths of land, which often means seizing property. Feigenbaum points to a proposed rail project in Texas that might not be financially viable due to the large amounts of land that would need to be seized from ranchers.

As for the often-promised environmental benefits of high-speed rail, Flashman acknowledges they won't materialize in California. Rail lines around the world have failed to remove cars from the road, and according to Feigenbaum, the initial construction of the California line alone would release more greenhouse gases than the train could recoup in 80 years.

California's project will be both the slowest bullet train in the world—and the most expensive. The Rail Authority cut costs by using track mixed with conventional rail, which means the train won't reach the speeds they promise. Coupled with a sinewy route that winds its way between endpoints, that means it will never go from Los Angeles to San Francisco in the promised 2 hours and 40 minutes.

The train, if it ever comes to pass, will also be competing with air travel at a time when a new generation of quiet supersonic planes is about to take flight. Autonomous vehicles will soon give passengers the same freedom to sleep, work, or read as train travelers. And then there's Elon Musk's plans for hyperloop pod transport in a near-vacuum tube at speeds up to 800 miles per hour.

"If government gets out of the way of deciding which transportation modes we need in the future," says Feigenbaum, "the private sector will do a much better job of innovating and creating profitable transportation modes that people want to use, instead of locking in a sub-optimal choice from the nineteenth century."

Justin Monticello is a producer at Reason.