The claim that Americans use 500 million plastic straws daily is based on a nine-year-old's school project. 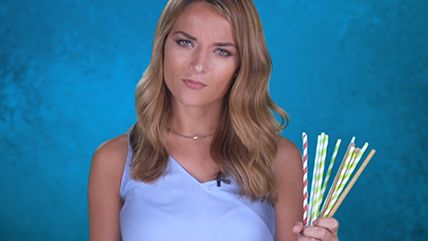 Have you used a plastic straw lately? Did you feel guilty? Celebrities and activists hope so! They want us all to #stopsucking.

Companies are also getting in on the trend; Starbucks recently decided to phase out plastic straws in all its stores by 2020. Other companies like American Airlines, Sea World, and Royal Caribbean are planning to ban plastic straws.

In our latest video, Stossel TV contributor Kristin Tate, author of How Do I Tax Thee, examines what a straw ban would accomplish.

Angela Logomasini, a senior fellow at Competitive Enterprise Institute, told Tate that "the idea that you're going to ban straws and save the world is ridiculous."

Plastic pollution in the ocean is a real problem, but only about 1 percent of it comes from the U.S. Of that 1 percent, only a tiny fraction comes from plastic straws.

How can that be? Celebrities tell us Americans use 500 million plastic straws every day. "Polluting water and killing sea life," according to actor Adrian Grenier.

The 500 million number is repeatedly used by the media. But it comes from a nine-year-old's school project. The real number is much less—closer to 175 million.

Still, radio talk show host Ethan Bearman told Tate: "If we can reduce something that is easy, that is polluting the environment, that gets stuck in turtles' noses and causes damage to the environment, let's do that." Bearman is loose with the word "easy." He argues "we could easily" replace plastic straws with paper ones or other reusable options like metal or bamboo.

When Tate told Bearman that paper straws are eight times more expensive to make, Bearman replied: "I don't see that as being a huge difference in the price."

Logomasini says: "This is what environmentalists say about every policy they put out. A few cents here, a few cents there. Eventually, it begins to be a burden." She added: "Banning straws isn't going to do anything for the environment. So what they're just trying to do is take away my freedom for nothing in return."

Tate added: "As the environment has become cleaner, that's become a specialty of the environmental movement: Spend your money on feel-good policies that make no real difference."