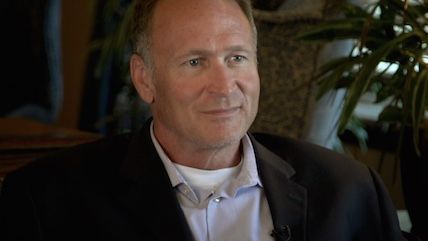 "[James] Madison warned us about devolving into a two-party system," says Utah state senator Mark Madsen. "And we see why now."

Earlier this year, Madsen announced he was leaving the Republican party to become a Libertarian. This came on the heels of a contentious Republic National Convention wherein Donald Trump supporters and party loyalists shouted down members of the Utah delegation who attempted to cast a first ballot for Sen. Ted Cruz. Cruz later gave a speech and received booes from a crowd angry that he declined to endorse Trump (Cruz eventually did give Trump his endorsement). Madsen refers to this ordeal as the "Cleveland experience" and credits it with spurring him to make the switch he'd been pondering for years.

Reason TV sat down with Madsen in the chambers of Utah's capitol building in Salt Lake City to discuss more about what motivated his switch, what he hopes to accomplish as a Libertarian, and what the future of the Republican and Libertarian parties might look like.

"We think things are bad now. Four years from now might be when the Libertarians have to step up and save the nation," says Madsen.