John McCain, the Senate's Most Influential Hawk, Is Dead

The late Arizona senator's relentless energy and patriotic sense of honor led him to heroic acts of defiance, but also misguided support for disastrous foreign interventions. 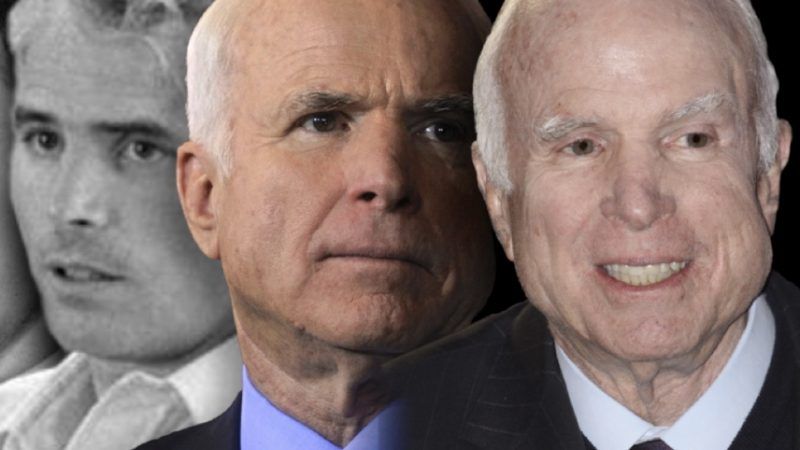 John McCain, the last great active American political figure of the 20th century, has lost his battle with cancer at age 81.

For both good and ill, McCain helped shape the purpose and application of Washington's considerable power for nearly half a century. Partly because of that mixed track record, his passing leaves as an open question what kind of future that McCain-style politics—with its robust, moralistic interventionism both at home but especially abroad—has in a political party and country that elected his rhetorical tormentor, Donald Trump.

Famously a former prisoner of war and two-time presidential candidate, McCain was a man whose irascible restlessness and sense of patriotic honor propelled him to defy his Vietnamese captors, tackle unusual legislative crusades, and wage periodic battles with his own party's leadership. Most enduringly, as the Cold War gave way to a U.S.-led new world order, McCain shook off his hard-earned Vietnam Syndrome to become a pivotal figure behind some of the most interventionist foreign policies in modern American history.

The namesake son and grandson of accomplished Navy admirals, McCain initially rebelled against his military destiny, graduating 894th out of an 1958 Annapolis class of 899. He drank and cussed, dated Florida strippers and Brazilian heiresses, and crashed an alarming number of planes before settling down to the family business of war.

Things did not start auspiciously. McCain was on the deck of the USS Forrestal when a stray bomb ignited a fire, killing 134 servicemen—the most deadly accident in Navy history. Three months later his own plane was shot down over Hanoi Harbor.

The aviator's rebellious nature served him well over the next five-and-a-half years, as he inspired cellmates with loud acts of defiance and quiet organization of internal communications systems, despite enduring torture that permanently damaged his body.

That experience, combined with the domestic discord he witnessed upon returning stateside in 1973, shook his faith in the wisdom of American foreign policy. As a freshman congressman, McCain opposed Ronald Reagan sending Marines to Beirut. As a senator, he criticized Bill Clinton's nation-building adventures in Somalia and Haiti. He described U.S. military involvement in Yugoslavia as "the aspect of the future of this nation that bothers me more than anything else."

Yet by 1998 McCain would emerge as arguably the Senate's most influential hawk. So what happened?

The unexpectedly easy military successes in the Gulf War and Yugoslavia, plus Europe's abdication of post-Cold War global leadership, led the senator to re-embrace the Teddy Roosevelt-style belief in comparatively benevolent U.S. military supremacy that his family had rallied behind for a century. Vietnam, particularly after he helped spearhead the normalization of relations with his former captors, could be filed away as an aberration.

"Our loss in Vietnam afflicted America with a kind of identity crisis," he wrote near the conclusion of his 1998 memoir Faith of My Fathers. "We should never have let this one mistake, terrible through it was, color our perceptions forever."

For most of his political career, and certainly after the publication of that first successful (and rightly acclaimed) book, McCain was the media's favorite Republican. During his first presidential run against George W. Bush, journalists literally swooned over his military resume, his wisecracking style, and his willingness to break with GOP orthodoxy on issues such as cigarette taxes and campaign finance reform.

That mutual love affair with what McCain once described as his "base" soured once he won the Republican nomination. But even in 2008 the press frequently mistook the man's pragmatism for a lack of ideology. In fact it was anything but.

The senator had a distinctly martial view of citizenship, in which individualism should be subsumed to the greater good. His longest war was against "corrosive cynicism," so anything creating more of the stuff—from steroids in professional baseball to political advertising on Facebook—was in his crosshairs. That same sense of high moral dudgeon could also take him to better places, such as his opposition to torture, defense of the post-World War II trading order of mutual tariff-reduction, and his annual attacks on Pentagon waste.

The notion of sacrificing for the greater good is fundamental not only to military culture but to the way religion and other private association informs our choices. But when attached to government force, it can easily result in explicitly anti-libertarian statecraft.

In his also-excellent 2002 campaign memoir, Worth the Fighting For, McCain expressed relief that both he and his vanquisher rejected libertarianism. "I welcomed a greater, if still limited, role for government in national problems, anathema to the 'leave us alone' libertarian philosophy that dominated Republican debates in the 1990s," he wrote. "So did George W. Bush, I must add, who challenged libertarian orthodoxy with his appeal for a 'compassionate conservatism.' He based much of his more activist government philosophy in an expanded role for the federal government in education policy and in his support for contributions that small, faith-based organizations could make to the solution of social problems. I gave more attention to national service and to a bigger role for government as a restraining force on selfish interests that undermined national unity."

Understandably, it's McCain's profound sense of honor that obituarists will be emphasizing in the coming days. With his health already deteriorating in 2017, the senator led a remarkably vigorous global tour to reassure nervous American allies, called out eruptions of conservative bigotry, and cast the deciding vote against the flawed repeal of Obamacare. And to the end, he welcomed the opportunity to rebuke Trump.

"To fear the world we have organized and led for three-quarters of a century," McCain co-wrote in his final book, The Restless Wave: Good Times, Just Causes, Great Fights, and Other Appreciations, "to abandon the ideals we have advanced around the globe, to refuse the obligations of international leadership for the sake of some half-baked, spurious nationalism cooked up by people who would rather find scapegoats than solve problems is unpatriotic."

McCain could be disarmingly self-critical, copping to his own missteps from the mostly forgotten Keating Five scandal that nearly derailed his career, to the selection of Sarah Palin as his running mate, which he now calls a "mistake," saying he should have chosen his hawkish pal Joe Lieberman instead. But aside from a few, usually vague nods in the direction of foreign policy overreach—"We haven't always used our power wisely," he writes in his new book. "We have abused it sometimes and we've been arrogant"—the senator was stubbornly unreflective about all the interventionist follies he championed, from Iraq to the shores of Tripoli.

Honor comes in many flavors, and there is no doubt that McCain was motivated throughout his lifetime by his familial and creedal sense of duty, leading to moments of iconoclasm, controversy, and leadership. But there is honor, too, in seeking a more humble conception of Washington's role in the world. The expensive failures of America's adventurism abroad over the past two decades helped quadruple the national debt, destabilize the Middle East, and produce the more inward-looking American populism that McCain always despised.

Like the journalistic class singing his praises this week, McCain was not overly reflective about the gap between aspiration and execution, between an expressed goodwill toward your fellow man and the real-world effects of America thumbing the scale. Since one of the senator's most endearing qualities was self-effacement and the recognition of human frailty, let us all submit to the lesson he could not quite bring himself to face: It is never enough to simply wish for the best then press the big red button marked "Do something."

Produced by Todd Krainin. Written and narrated by Matt Welch.

Aspirato by Kai Engel is licensed under a Attribution-NonCommercial License. http://freemusicarchive.org/music/Kai_Engel/Caeli/Kai_Engel_-_caeli_-_01_aspirato_1225

Newsroom by Riot is licensed under a Attribution-NonCommercial License https://youtu.be/dSw3JKLqy30

Earthmover by Lee Roseveere is licensed under a Attribution-NonCommercial License http://freemusicarchive.org/music/Lee_Rosevere/Mystic_Moods/Earthmover

27 Ghosts III by Nine Inch Nails is licensed under a Attribution-NonCommercial License. https://archive.org/details/nineinchnails_ghosts_I_IV/27_Ghosts_III_320kb.mp3

Dry Air by Podington Bear is licensed under a Attribution-NonCommercial License. http://freemusicarchive.org/music/Podington_Bear/Tender/DryAir

Subdivision of the Masses by Philipp Weigl is licensed under a Attribution-NonCommercial License. http://freemusicarchive.org/music/Philipp_Weigl/Sound-trax/Subdivision_of_the_Masses

Relatives cry as they carry a coffin outside a hospital morgue in Baquba, Iraq (2006) by Helmiy Al Azawi Reuters/Newscom. https://www.newscom.com/nc/wmark/Newscom-rtrltwo046120?inputPath=/db/RTR/rtrphotos2/docs/700/866.thm

John McCain pulled out of Hanoi Lake (1967) by Crandall/SIPA/Newscom. https://www.newscom.com/nc/wmark/Newscom-sipaphotos981675?inputPath=/db/SIPA/sipaphotos/docs/981/675.thm