Inside America's First Restaurant for Weed 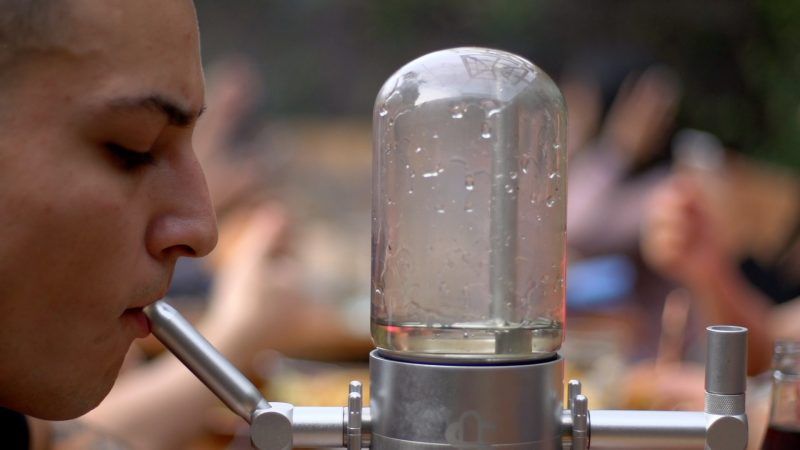 "We wanted it to be an escape," says Lily Estanislao, general manager of Lowell Farms Cafe, the first fully operational cannabis restaurant in the U.S. "You're kind of going on a little trip when you're here."

Housed in a 20,000-square-foot former brewery in West Hollywood, Lowell Farms Cafe has a menu that includes edibles, joints, high-tech bongs, and vapes.

Erika Soto, an industry veteran, works as a "flower host"—a waitress for weed. When guests arrive, she walks them through their options, explains the effects of various strains, and advises them on proper dosage levels. Lowell is an "important" step combating the "negative stigmas that [surround] the subject that is cannabis," Soto told Reason.

"What our ultimate goal is, is to be able to pair the cannabis with the foods. Your flower host would be like a sommelier, and we want the food service to be versed in cannabis as well," says Estanislao, who tells Reason that Lowell has received more than 800 job applications in its first month of operation. "Everybody wants to work here," she says.

For now, Lowell could only be located in the city of West Hollywood, which created a special permit for cannabis hospitality businesses. Estanislao and her team are making a big effort to get along with their neighbors. After the rabbi at a nearby synagogue expressed concern that her congregants would be bombarded with marijuana odor, the restaurant installed massive air filters and machines that spray a scent-neutralizing essential oil called Cannabolish.

West Hollywood has "been on the forefront of just being accepting of everything that's more liberal and that's that needs to be liberated," says Soto. "So West Hollywood is now known as the mecca of cannabis."

Because California requires that all cannabis products to be tracked seed-to-sale and lab-tested, Lowell Cafe isn't allowed to make its own marijuana-infused foods or drinks. Everything must be prepackaged.

And lighting up a tobacco cigarette is prohibited at Lowell, in compliance with West Hollywood law.

Lowell Cafe's license is provisional for the first year, after which the city council will decide whether to renew it. In the meantime, more cannabis hospitality shops are coming. The city has issued licenses to seven additional businesses, including one that will offer a virtual reality experience and another a day spa.

Estanislao is working hard "to set the standard."

"[We want to] prove to ourselves and prove to everyone else that this is something that can be done," she says. "If we can just spread the love through the country, then that's for sure what we want to do."