Impossible Foods: Capitalism Is the Most Powerful Lever To Fight Climate Change

Impossible Foods says that animal agriculture is a leading cause of climate change. Instead of trying to pass laws to ban meat, it's providing tasty, plant-based alternatives. 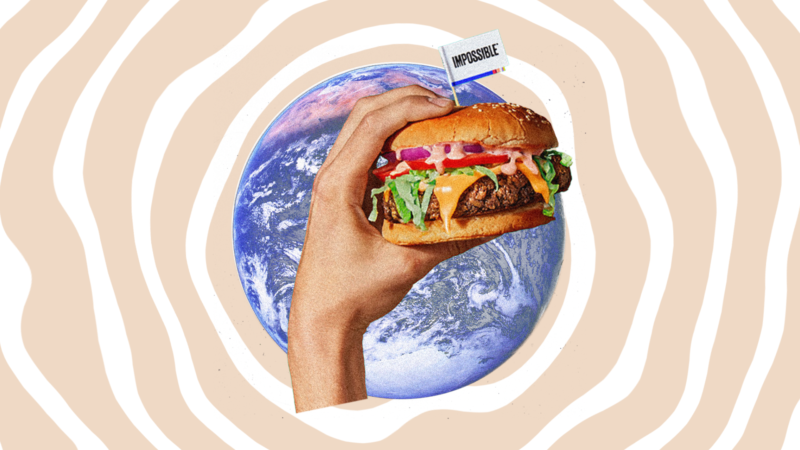 "We don't have time to wait for an international consensus on something as disastrous as climate change. We need to employ every single lever at our disposal. And frankly, that includes one of the most powerful levels we have, which is capitalism and consumer choice," says Rachel Konrad, the chief communications officer of Impossible Foods. Reason's Justin Monticello sat down with Konrad at the Consumer Electronics Show in Las Vegas in January of 2020.

Impossible Foods creates plant-based alternatives to meat. Its first product, the Impossible Burger, closely approximates the look, texture, and taste of traditional ground beef by using some of the same molecules found in animal meat but extracting them from plants instead. It debuted in July of 2016 and is now sold in roughly 17,000 restaurants worldwide. Konrad says that the company was founded with the explicit mission to save the world from "the disaster of climate change."

You can buy Impossible products at Dunkin Donuts, White Castle, Burger King, Whole Foods, Qdoba, Red Robin, and other restaurants. For now, it's significantly more expensive than traditional meat, but Konrad says that will change.

"The impossible burger uses about 80 percent less water, about 90 percent less energy, and about 95 percent less land" than most traditional beef production, she says. "Over the long term that pushes the cost for us, and ultimately for the consumer, down."

Konrad says Impossible Foods creates new products based on their potential environmental and public health impacts. The company's first priority was beef, but in January it announced the launch of Impossible Pork and Impossible Sausage.

Impossible Pork, Sausage, and Burger cook and taste very similarly to real meat. The company's key innovation here is heme, the same protein that makes blood red, which allows its simulated meat to "bleed" and sear like a beef burger. Impossible Foods isolated the protein from soybeans and developed a genetic engineering process to manufacture it in bulk.

The meat industry has responded to this plant-based competition by pushing for labeling laws that clarify that Impossible Foods' and similar companies' products aren't the real thing, on the grounds that consumers might be confused about what they're actually buying.

Konrad isn't buying that criticism: "That's obviously complete bullshit. Consumers are absolutely certain of what they're buying when they buy our product, which is why we've seen such stratospheric growth."

Speaking fondly of economic growth in any capacity is exceedingly rare among climate activists, where markets are often seen a major contributor to climate change. Impossible Foods takes the opposite position there. While Konrad says she has some issues with capitalism, "the reality is that we don't have time to shift the economic system in the entire world in order to fix it, in order to then fix climate change…we need to leverage every single thing that we can. And I don't know if you're going to find a more powerful lever right now than capitalism, consumer demand, and consumers' rational behavior."