Here's What Happened At the Libertarian National Convention 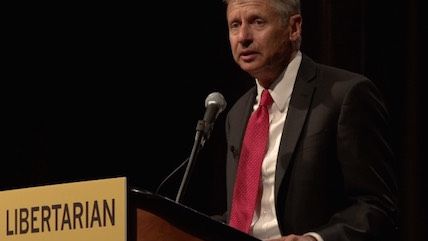 Reason TV was on the floor of the Libertarian National Convention in Orlando, Florida as the party nominated its presidential ticket of two former governors: Gary Johnson and William Weld.

Emotions ran high as activists unsatisfied with the libertarian bona fides of vice presidential nominee Weld forced multiple votes on both the presidential and vice presidential ballots. Johnson took to the stage and pleaded with delegates to give him his vice presidential choice, arguing that it's the only chance at maximizing national exposure for the party and possibly even taking the White House.

Scroll down for downloadable versions of this video, and watch all of Reason TV's coverage of the Libertarian National Convention here.