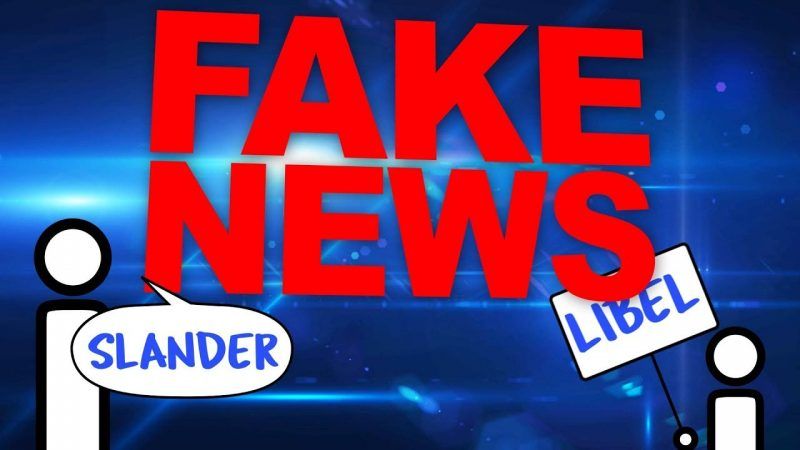 Can the law punish deliberate lies about public matters?

Here are the six rules of fake news:

Of course, the law doesn't call this "fake news"—it calls it "defamation."

Intentional lies about particular people or companies can lead to massive damages awards, including punitive damages. They can even lead to criminal punishment in states that still have "criminal libel laws," though such prosecutions are pretty rare.

Negligent mistakes about particular people or companies can also lead to damages awards, unless the statements are about public officials or so-called "public figures"—people or businesses who are quite famous or influential. Those plaintiffs have to show the speaker knew the statement was false or at least was likely false.

And in many states, some falsehoods about particular people can lead to damages even if they don't harm a person's reputation. That's called the "false light" tort. Classic example: Baseball great Warren Spahn once won a damages award because a biographer had falsely claimed that Spahn was a war hero—even though that tended to falsely enhance Spahn's reputation rather than harming it.

That's true even for political, religious, or charitable fundraising, which is usually protected by the First Amendment. If you try to get people to donate money to your group, but lie about what it's doing, you could be sued or even prosecuted.

But it's not clear how far this goes. For instance, no appellate court has allowed a fraud lawsuit against a magazine on the theory that it lied in some sensational story so as to sell more magazines.

Commercial advertising is generally less protected than other speech, especially when it comes to false statements.

Back in 1798, Congress tried to ban lies about the federal government with the infamous Sedition Act. Some justices at the time thought the law was fine, but the Supreme Court has since concluded that such a ban violates the First Amendment.

So a law banning flat-earth theory, for instance, would be unconstitutional. Same for laws that try to punish falsehoods about, say, climate change or vaccinations. In these "broad areas," the justices say, "any attempt by the state to penalize purportedly false speech would present a grave and unacceptable danger of suppressing truthful speech" [quoting United States v. Alvarez, 132 S. Ct. 2537 (2012)].

In 2012, the Court struck down the Stolen Valor Act, which criminalized falsely claiming that you've won a military medal; while six justices agreed on that result, the reasoning was split into two groups.

Four justices said that most noncommercial lies are broadly protected by the First Amendment, unless they fit into a few categories such as defamation or fraud or perjury.

But two justices concluded that lies are only kinda, sorta, sometimes protected. They held that restrictions on such lies "warrant neither near-automatic condemnation … nor near-automatic approval."

So whether any particular kind of lie is unprotected was left to be decided case by case, without much guidance from the Supreme Court.

Since it generally takes five justices out of the nine to set a conclusive precedent, it's hard to say what's allowed and what's not. You'd think a question that's this fundamental would have been resolved by now, but, uh … no.

For instance, some states ban deliberate lies in election campaigns. Is that constitutional?

Not if it's applied to statements about the government, or about social science, or about history. But what if it's more specific, like a candidate claiming endorsements that he didn't actually get? That's a harder call, and lower courts disagree on whether broad bans on lies in election campaigns are constitutional.

Or what about hoaxes that suck up police resources? Back in 2009, Andrew Scott Haley posted YouTube videos in which he purported to be a serial killer and gave clues to his supposed killings. He was eventually prosecuted for making false statements that he knew would come to the attention of law enforcement and trigger an investigation. The Georgia Supreme Court held that the First Amendment didn't protect such a hoax. The U.S. Supreme Court refused to consider the case, leaving that issue unresolved outside Georgia.

This is the third episode of Free Speech Rules, a video series on free speech and the law. Volokh is the co-founder of The Volokh Conspiracy, a blog hosted at Reason.com.