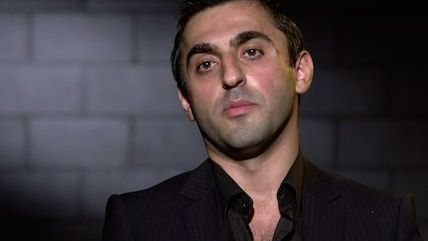 You've probably seen them before: internal border checkpoint refusals, now a popular YouTube genre. Some are funny. Others are hostile. But for Greg Rosenberg, a naturalized U.S. citizen who speaks accented English, an encounter with South Texas border patrol resulted in weeks of jail time without a single charge being prosecuted.

Rosenberg immigrated to America 10 years ago from Armenia. Memories and family stories of Soviet rule in his country of origin infused him with strong political beliefs and a reverence for individual rights.

"Back then [in Soviet-controlled Armenia], if you complained about the government, they took you to Siberia," says Rosenberg.

So perhaps it's no surprise that Rosenberg is a checkpoint protester. As a long-haul trucker, he has to drive through these all the time. After all, there are about 170 of them scattered across the United States. And keep in mind, these checkpoints aren't on an actual border. They just have to be within 100 miles of one. The ACLU estimates that roughly two-thirds of the nation's population lives within this 100-mile zone.

Rosenberg's ordeal began in the border town of Laredo, TX. He and his friend pulled onto I-35 North at around midnight on September 26 in a truck carrying a load of Xerox machines destined for Ft. Worth. But only 29 miles north of the border, they'd encounter the Laredo North Border Patrol Station. And Greg would undergo a checkpoint interrogation like he'd never experienced before.

"They arrested me for what I looked like, but they pressed the charges because of my beliefs," says Rosenberg.

To see the full story of the encounter that led to Rosenberg's 19-day detainment on charges of "resisting, assaulting, or impeding arrest," watch the video above. Scroll down for downloadable versions. Approximately 9 minutes. Shot, produced, and edited by Zach Weissmueller.