Cryptography vs. Big Brother: How Math Became a Weapon Against Tyranny 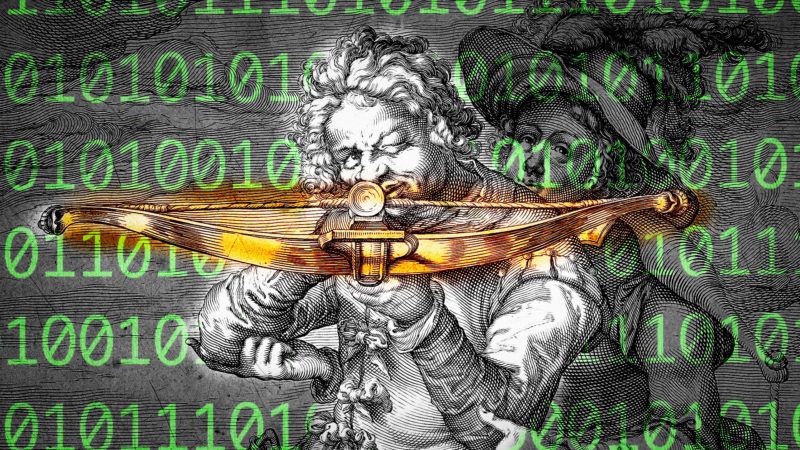 (The Archer and the Milkmaid)

"Large bureaucracies, with the power that the computer gives them, become more powerful," said New York Times reporter David Burnham in a 1983 C-Span interview about his book The Rise of the Computer State. "They are escaping the checks and balances of representative democracy."

Burnham warned that the integration of computers into every aspect of daily life could lead to a "level of automated surveillance unknown in any previous age." For society to change course, Burham argued, citizens would need to rise up through the democratic process and demand new legal protections to safeguard their privacy.

"There are ways to deal with it," Burnham told C-SPAN. "We have done it. And all I hope is that we're on our toes enough and alert enough to see them and go after them."

"This is just political jawboning," retorted Timothy C. May to the idea that politics could keep the computer state in check.

May, a former Intel physicist, believed that putting faith in representative democracy was naive and that only technology could save us from the Orwellian state. He became a co-founder of the cypherpunk movement, which came together in the early 1990s around the idea that a recent breakthrough in the field of cryptography was the key innovation for combatting tyranny.

The second part in Reason's four-part documentary series on this movement, "Cypherpunks Write Code," looks at the political implications of this breakthrough in cryptography. (Part one is here.)

The cypherpunks saw cryptography as comparable to the crossbow, which had enabled individuals to go up against medieval armies, as mathemetician Chuck Hammill argued in a 1987 paper presented to the Future of Freedom Conference.

"I certainly do not disparage the concept of political action," Hammill wrote, but "for
a fraction of the investment in time, money and effort I might expend in trying to convince the state to abolish wiretapping and all forms of censorship—I can teach every libertarian who's interested how to use cryptography to abolish them unilaterally."

Hammil's paper, "From Crossbows To Cryptography: Techno-Thwarting The State," was the first item posted to the cypherpunks' widely read email list.

"The mathematics which makes this principle possible," as Hammill put it, was public-key cryptography, an astonishing breakthrough. It was developed by the Stanford cryptographers Whitfield Diffie and Martin E. Hellmann, who first explained the concept in a November 1976 paper published in IEEE Transactions on Information Theory. The following year, a team of researchers at MIT developed the first working public-key system, known as RSA.

Many cypherpunks first learned about this discovery from the August 1977 issue of Scientific American, in which the "Mathematical Games" columnist Martin Gardner described a "new kind of cipher that would take millions of years to break."

As Gardner told his readers, a discovery had been made that would "revolutionize the entire field of secret communication."

Another way of thinking about public-key cryptography is that it replicated the privacy protections of the analog world in cyberspace. "If you look at 1791, at the moment of the Bill of Rights," says Diffie, "impenetrably private conversations dominated." What the framers didn't foresee is that private communication would happen via computers sending messages across the world that could easily be intercepted. "Public-key cryptography gives you a mechanism whereby you can recover this ability to have an impenetrably private conversation between two people."

Sending a secret message used to involve translating words through a secret code that government agents or other spies could potentially crack. Anyone sending and receiving messages also had to have a copy of the secret key or translation device, just like the decipher rings that schoolchildren started collecting in the 1930s.

Public-key cryptography made decoding devices unnecessary and figuring out the pattern effectively impossible. The big breakthrough was an easy-to-solve mathematical formula that you could funnel words into just as easily as dropping them through a trapdoor. But if you flipped the problem around and tried to pull the message out the other side, the formula was almost impossible to solve, such that in 1977 a supercomputer trying random numbers would need 40 quadrillion years to surface the answer.

But the person who set up the mathematical formula, or trap door, held the answer to the problem, or secret code, making it possible for that person to retrieve the original message.

Diffie compares the whole system to the most ubiquitous trapdoor system for sending messages. "Anyone can throw a letter in a mailbox," he says, "but only the mailman, who has a key, can take it out.'

Anyone in the world could set up one of these equations, serving as the mailman of his or her very own impenetrable virtual letterbox. And because that individual could prove ownership of the mailbox by opening it with the only known key, public-key cryptography also made it possible to set up a provable identity on the internet completely disconnected from any real-world personal information.

"One way of reading the Second Amendment was that it was a way of making sure that if the government tried to suppress the people, the people would win," Friedman says.

"In the modern world, the weapons that the army has differ by a lot more than they did in the 18th century. But I also think if you look at what politics are like nowadays, the real wars between the government and the population are information wars, not physical wars. Encryption means they can't arrest you. They can't blackmail your key people. They can't do anything of the things governments might do to make sure that public information is what they wanted."

Meanwhile, in the late 1970s, the U.S. intelligence community started doing everything in its power to keep this new tool out of the hands of the general public.

Part three in this series will look at the U.S. government's effort to halt the widespread use of public-key cryptography with threats of criminal prosecution, and the legal and public relations battle waged by John Gilmore, a founding member of the cypherpunk movement, for free speech rights in software.