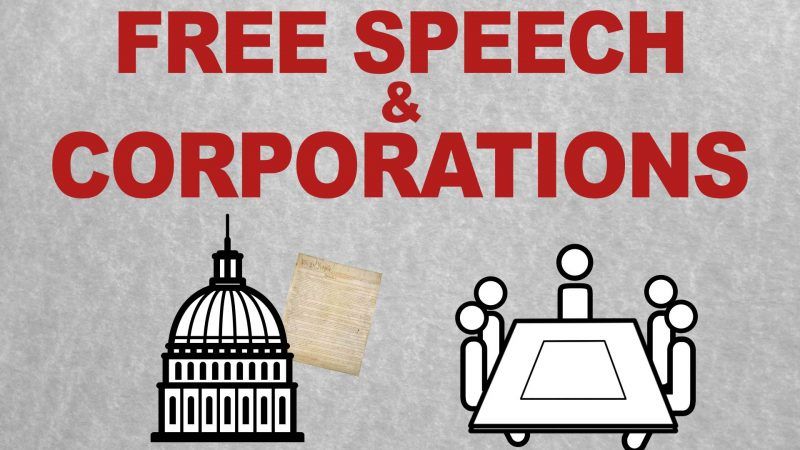 Here are five rules of free speech and corporations.

When the Supreme Court split sharply over corporate speech in the 2010 Citizens United case, no-one doubted that the First Amendment protects corporations generally; the question was whether there was an exception for corporate speech supporting or opposing political candidates.

Rule #2: The media doesn't have any greater First Amendment rights than other speakers. The "freedom of the press" isn't the freedom of a business category called "the press." It has been understood, since the 1700s, as the freedom of all to use the printing press (and its technological heirs). There are some statutes that give institutional media special additional rights beyond what the First Amendment gives them—but the Constitution doesn't distinguish reporters from bloggers, or media businesses from other businesses.

Rule #3: Unions have free speech rights, too. Citizens United struck down a federal law that banned both corporations and unions from speaking out for or against political candidates.

That's a familiar rule for all sorts of spending. If you don't like Ben & Jerry's liberal messages, you don't have to buy their ice cream. But you can't just buy a share and then demand that they stop saying things that you, as a minority stockholder, dislike. Likewise, if you don't like a company's charitable contributions, or the tone of its advertising, or its speech opposing unionization, you can't stop such corporate action even if you own shares. And you can't control The New York Times' editorial policy even if you are a stockholder.

The same is true for spending about political candidates. If a corporation wants to endorse a candidate, dissenting shareholders can't stop that any more than they can stop any of the corporation's other action or speech.

Rule #5:  Corporate and union direct contributions to candidate campaigns can be sharply limited, though independent spending is fully protected. The rationale for this is complicated, but basically direct contributions of money to candidates, whether by corporations or individuals, are less constitutionally protected than speech (including expensive speech) by those corporations or individuals.

Rule #1: Restrictions on corporate speech generally violate the First Amendment, to the same extent that restrictions on individual speech do. Some Justices think there should be an exception for speech supporting or opposing candidates and maybe ballot measures, but all the Justices agree that the general rule is that corporations have free speech rights.

Rule #5: Corporate and union direct contributions to candidate campaigns can be sharply limited, though independent spending is fully protected.

Written by Eugene Volokh, who is a First Amendment law professor at UCLA.
Produced and edited by Austin Bragg, who is not.
Additional graphics by Joshua Swain.

This is the fifth episode of Free Speech Rules, a video series on free speech and the law. Volokh is the co-founder of The Volokh Conspiracy, a blog hosted at Reason.com.