Can Genetically Modified Mosquitoes Save The World From Zika?

A look at several mosquito-modification projects and the political and cultural pushback they're facing. 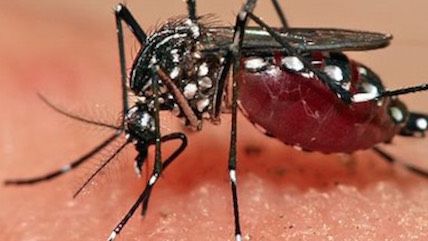 Every Wednesday and Friday, members of the Clovis Mosquito Abatement team pick up a box from the post office, shipped to them from a lab in Kentucky. Inside that box are 20 tubes, each containing 1,000 male mosquitoes infected with a bacterium called Wolbachia that will render the eggs of any female they mate with infertile.

Project manager Steve Mulligan says it took a little explaining to persuade residents of a neighborhood in Clovis, Calif., to allow them to dump 40,000 mosquitoes in their front yards every week.

"It is unusual," says Mulligan. "The idea of releasing mosquitoes to control mosquitoes, that is thinking a little outside of the box."

But in the age of Zika virus, which has spread from South America to parts of Florida and even to Central California, people are open to new ideas to eliminate a species of mosquito that is responsible for millions of human deaths around the world.

While the residents of Clovis have been open to the audacious experiment of releasing bacteria-laden insects into their neighborhoods, other proposals have stoked far more controversy. A company called Oxitec engineered a mosquito in a laboratory to produce similar infertility effects to the Wolbachia infection method. But because this approach involves genetic modification as opposed to bacterial infection, Florida Keys residents formed a resistance movement to the GM mosquito.

"We don't want to be guinea pigs," says one Florida Keys resident at a town hall meant to field concerns about the mosquito release.

But with so many lives on the line, scientists like Zachary Adelman at Texas A&M questions the morality of opposition to genetically modified mosquitoes and has harsh words for those invoking the precautionary principle to halt the release of genetically modified organisms into the environment.

"While you're waiting, and while you're being 'precautionary,' tens of thousands of people—children—are going to die of hemorraghic fever from things like Dengue, or thousands of children will be born with microcephaly because of Zika," says Adelman.

Adelman and his team have modified the genomes of mosquitoes with the cutting-edge gene-editing technology CRISPR. When the transgenic mosquitoes mate with non-modified mosquitoes, the off-spring will almost all be male.

"We can link it with the so-called 'gene drive' where the gene would be inherited beyond 50 percent, at these super rates, where almost all the progeny would carry this gene… And eventually, the mosquitoes would run into a problem. They would run out of females, and then there would be no more eggs, and then that would be that for them," says Adelman.

One common objections that Adelman encounters is that wiping out a species of mosquitoes could have unintended consequences on our ecosystem. But he points out the particular mosquito he's targeting, Aedes Aegypti, is only native to certain parts of Africa and has spread across the planet only with human colonization.

"There are no species that are dependent on it, that must eat it to survice," says Adelman.

The Clovis release program concluded in mid-October, and scientists are still collecting data on the population effects. The trial release in the Florida Keys was approved by public referendum, but the Keys Mosquito District now has to seek FDA approval. Adelman says his CRISPR-modified mosquitoes still need further study in the lab before they're ready to be released into the wild.

Watch the full video above.