Administrators are squeezing out charters in the name of desegregation. The results: Parents are upset, enrollment is declining, and the schools are no more integrated than before. 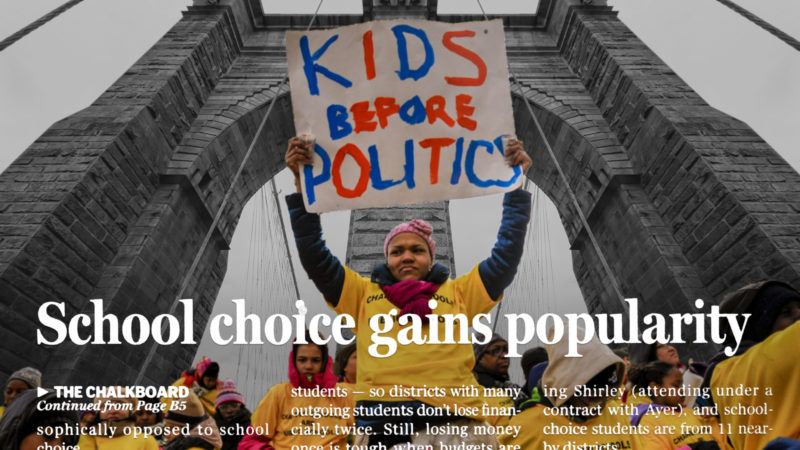 School choice has proven consistently popular among one very dependable constituency: parents. And unpopular among another: unionized teachers. The rapid spread of school choice over the past 20 years has triggered an increasingly fierce union pushback, setting up an inevitable clash.

Enter an insidious yet helpfully descriptive new term in policymaking: "controlled choice." Yes, parents still get to "choose" their desired schools, but public education bureaucrats get to "control" the final outcome. And lately, from New York to San Francisco, Charlotte to Polk County, the main criteria that matters is not student performance, but race.

"New York City Schools Got A Little Less Segregated This Week," my local City Councilman in Brooklyn, Brad Lander, wrote at the beginning of this school year. "The Winner Is Everyone." Well, about that.

In 2007, the Supreme Court barred school districts from assigning students to schools based on race. So instead they use income as the primary determinant, and characterize the resulting admissions changes as "desegregation." The goal is to have poorer kids, homeless kids, and English-language learners spread evenly among schools, while crossing fingers that parents won't bolt and all schools will improve.

When this system was tried in my kids' Brooklyn school district, it ended up being hellishly complicated. The team that designed New York City's school-picking algorithm literally won the Nobel Prize for Economics. Fun fact: One of those designers didn't like where the system placed his kid so he opted out and chose a charter. And I don't blame him!

The good news this year is that some kids who had never even considered some of the high-performing schools both applied and were admitted in higher numbers. School choice for the win!

But turns out parents don't much enjoy being controlled. One-size-fits-all schemes may look good on paper to progressives, but when applied to their own special snowflakes, suddenly lefty parents start sounding as skeptical of central planning as F.A. Hayek, or at least quietly eyeing the exits. After more than a half-decade of increasing enrollment, my district's 6th grade class shrunk by a whopping 7 percent this year.

What happens in Brooklyn, alas, doesn't stay in Brooklyn. The same policy process is underway in Queens, and parents are already revolting. The New York City school chancellor is not winning many new converts to these changes with his habit of calling skeptical parents "racist." Meanwhile the city is considering a mandate that would require every traditional public school have roughly the same racial, ethnic, and socioeconomic makeup within 10 years. Good luck with that.

Parents of means can always take the expensive options of private school or physically moving to a new district. But the main off-ramp for the non-rich has been New York's extensive charter school system. Now just guess what kind of schools New York politicians are placing an artificial cap on?

So how has "controlled choice" worked out in the world? The Cato Institute's David J. Armor looked at a half-dozen controlled choice districts and found that enrollment went down, richer families fled, and schools didn't even end up more integrated!

So a friendly reminder here from the People's Republic of Brooklyn: "Controlled choice" is an oxymoron. Top-down systems look bad from the bottom up. Choking off supply, then browbeating demand, is no way to run a service. New York and other cities would be better off allowing more competitors to provide public education, and more choice to meet the idiosyncratic needs of a challenging, diverse, and high-achieving city.

Reason is celebrating National School Choice Week. This story is part of a series that will be published over the course of the week highlighting different K-12 education options available to children and families.