Reason editors share notes on the end of the political war against marijuana, plus the latest on Trump/Russia and the "undocumented" Andrew Cuomo. 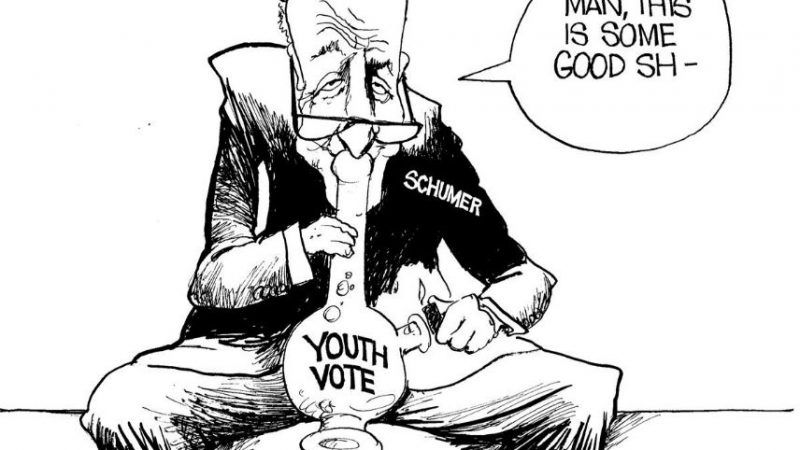 How over is the political War on Marijuana, as distinguished from the actually existing laws that continue to prohibit the stuff? This over: Longtime drug warrior Sen. Chuck Schumer (D–N.Y.), the Senate minority leader, came out last week in favor of descheduling pot as a controlled substance and removing federal penalties for weed-related activities that are legal within their given states. And he did so in the name of "freedom" and even "federalism." How do you do, fellow libertarians!

The welcome Schumer evolution kicks off the latest editor's roundtable edition of the Reason Podcast, featuring Katherine Mangu-Ward, Nick Gillespie, Peter Suderman, and me discussing news of the day and week. Also receiving earfuls: the latest Trump/Russia-related histrionics, New York Gov. Andrew Cuomo's furious tacking to the left in the wake of a progressive challenge, plus Season 2 of Westworld.

'Mandingo Tribe' by Trevor Flowers and Iheka-Chama is licensed under CC BY NC ND 4.0

"A Possible Victory for Federalism and Marijuana Legalization," by Ilya Somin

"Why Pot Legalization Is the Most Important Issue Before Voters This Election Day," by Nick Gillespie and Matt Welch, Huffington Post

"Democrats Cling to Collusion as Explanation for Clinton's Loss in New Lawsuit Against Russia, Hackers, and Trump Campaign," by Elizabeth Nolan Brown

"Forget Robert Mueller. Trump's Attacks On Syria Are a Reminder We're Already in a Constitutional Crisis," by Peter Suderman

"Gov. Cuomo to Use Pardons to Restore Voting Rights to Some Felons," by Scott Shackford

"Westworld's Season 2 Premiere Was a Subtle Salute to Video Game Side Quests," by Robby Soave