Should Adults Be Allowed to Use Any Drug They Choose? A Soho Forum Debate 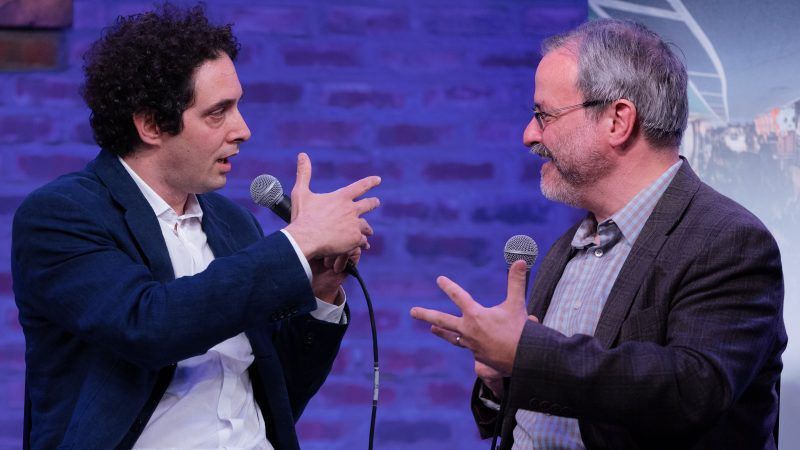 Special Note: Scroll to the bottom of this page for important news about Reason podcasts.

Except for laws prohibiting the sale of drugs to minors and driving while impaired, all laws that penalize drug production, distribution, possession, and use should be abolished, along with special "sin" taxes on drugs.

That was the resolution of a public debate hosted by the Soho Forum in New York City on October 7, 2019. It featured Jacob Sullum, a senior editor at Reason magazine, and former New York Times reporter Alex Berenson. Soho Forum Director Gene Epstein moderated.

Arguing for the affirmative was Sullum, who is the author of Saying Yes: In Defense of Drug Use (2003) and For Your Own Good: The Anti-Smoking Crusade and the Tyranny of Public Health (1999). He was the 2004 recipient of the Thomas S. Szasz Award for Outstanding Contributions to the Cause of Civil Liberties.

Berenson, who argued for the negative, is the author most recently of Tell Your Children: The Truth About Marijuana, Mental Illness, and Violence (2019). Berenson is also a best-selling spy novelist. His popular titles include The Deceivers, The Silent Man, and The Ghost War.

It was an Oxford-style debate, in which the audience votes on the resolution at the beginning and end of the event, and the side that gains the most ground is victorious. This was the Soho Forum's first tie, with each debater convincing exactly 9.76 percent of the audience to come over to his side.

The Soho Forum, which is sponsored by Reason, is a monthly debate series at the SubCulture theater in Manhattan's East Village. To watch video versions of Soho Forum Debates, go here.

Special note: We've changed the way we're releasing our podcasts and we're asking all listeners to subscribe to each of our three new podcast streams by going to our podcasts page at Reason.com, Apple podcasts, or wherever you get your programs.

The new shows are:

Go to Reason's podcasts page, Apple podcasts, or wherever you get your shows, and subscribe now.