Should the U.S. Open Its Borders to Everyone? (Reason Podcast) 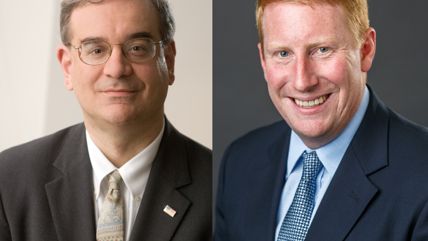 When the government puts "quantitative restrictions on immigration" it's attempting to centrally plan "a complicated market with people who have heterogeneous skills," argued economist Ben Powell at an immigration debate held Monday night in New York City. Powell, who's head of the Free Market Institute at Texas Tech University, went up against Mark Krikorian from the Center for Immigration Studies, who argued that if the U.S. were to eliminate numerical caps on immigration "100 million people per decade" might come here—"a revolutionary policy" that would destroy our social fabric.

The event was hosted by the Soho Forum, a monthly libertarian-themed debate series. The following proposition was on the table: "U.S. immigration policy should be to issue migration visas, without any numerical limitations, to all applicants who are not on a terrorist watch list, and who do not otherwise have criminal records or contagious diseases."

It was an Oxford-style debate, in which audience members vote before and after the speakers have their say, and the side that gets the most people to change their minds wins. Krikorian, arguing against the resolution, won the contest by a narrow margin. As we've done in the past, Reason is running audio from the Soho Forum's debate series on its podcast.

Listen below—and subscribe to our podcast at iTunes so you'll never miss an episode!