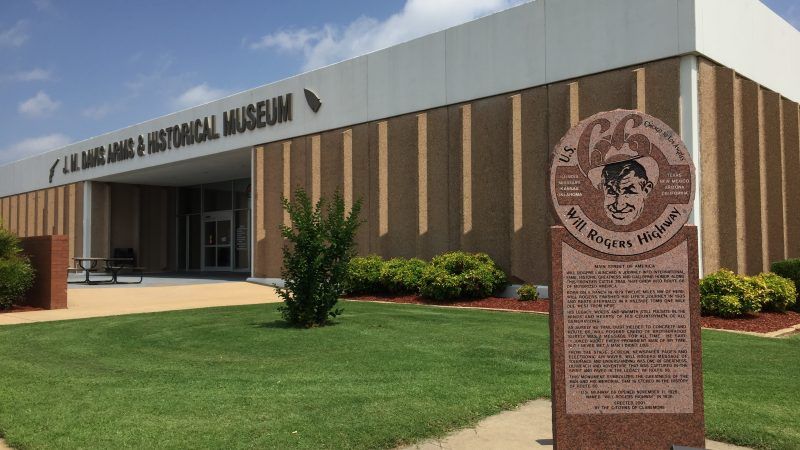 Located near Tulsa on Route 66, the J.M. Davis Arms and Historical Museum amazes and overwhelms. With 12,000 firearms on display, it offers the largest collection of guns you can see at any museum.

But it's not just a firearms museum. Boasting 50,000 total artifacts, the Davis Museum has plenty to engage the members of your party who aren't interested in guns. For example, there are 1,200(!) beer steins, plus 19th century parlor musical instruments, a large collection of saddlery and riding gear, and lots of displays about outlaws and lawmen.

The museum building is owned by the State of Oklahoma, so there is no admissions charge. A voluntary donation of $5 per individual or $10 per family is encouraged. The museum is in Claremore, Oklahoma, a small town that is now part of the Tulsa metropolitan area. Parking is free and extensive.

The museum's collection was donated in 1969 by J.M. Davis, a businessman and long-serving mayor of Claremore. Starting in the late 1920s, Davis had displayed his growing firearms collection at his hotel and coffee shop, enticing travelers on Route 66, which ran from Chicago to Los Angeles.

The museum reflects the time period when Davis was doing his collecting. It is incredibly deep for 19th and 20th century American and European firearms up through about 1969. The eighteenth century has some representation, and there are some guns from the seventeenth century, and even a Chinese hand cannon from 1350. But where the museum excels is from 1800 onward. The World War I era is particularly strong.

With well over 100 rows of displays, the Davis Museum takes a while to visit if you're going to look carefully at everything.

The majority of firearms exhibits are pegboard hangings, grouped by manufacturer, nationality, or type. So, for example, you can study large collections of Harrington & Richardson handguns, Mauser rifles, or Spanish handguns.

The Davis Museum isn't the only place where you can see a lot of Winchesters or Remingtons, but for American manufacturers that are no longer in business, and haven't been for decades, the Davis Museum may be the best place to view their products.

The signage and text on many of the manufacturer-grouped displays is sparse. It could be enhanced with more information about what a particular manufacturer or series of models contributed to the evolution and use of firearms.

Some of the most interesting displays focus on particular types of forgotten arms. Some of these, such as blunderbusses, were popular during their glory days. Others were obscure; for example, in "folding trigger" handguns, the trigger could be flipped forward and upward, thus reducing the risk of accidental discharge in a time before trigger guards became near-universal.

The quantity of firearms curiousa is larger than I've ever seen in any other museum. There excellent displays of disguised guns, miniature guns, and "suicide specials" (inexpensive, small, and not necessarily well-made handguns commonly carried for self-defense in the late 19th century). There's also a "cemetery gun"—a tripwire-activated swivel gun used to deter grave robbers in England in the early 19th century.

If you want to focus on the mainstream, you can peruse the rifles and shotguns that were sold en masse via the mail-order catalogues of Sears Roebuck or Montgomery Ward. Not to mention flare pistols, toy/cap guns, and boys' .22 rifles (very popular in the first half of the 20th century).

As the signage explains, firearms can be used for good or ill, depending on the user. This is reinforced by displays on guns used by lawmen and outlaws, including three handguns owned by the notorious 1930s bank robber Pretty Boy Floyd.

David Kopel is research director at the Independence Institute.